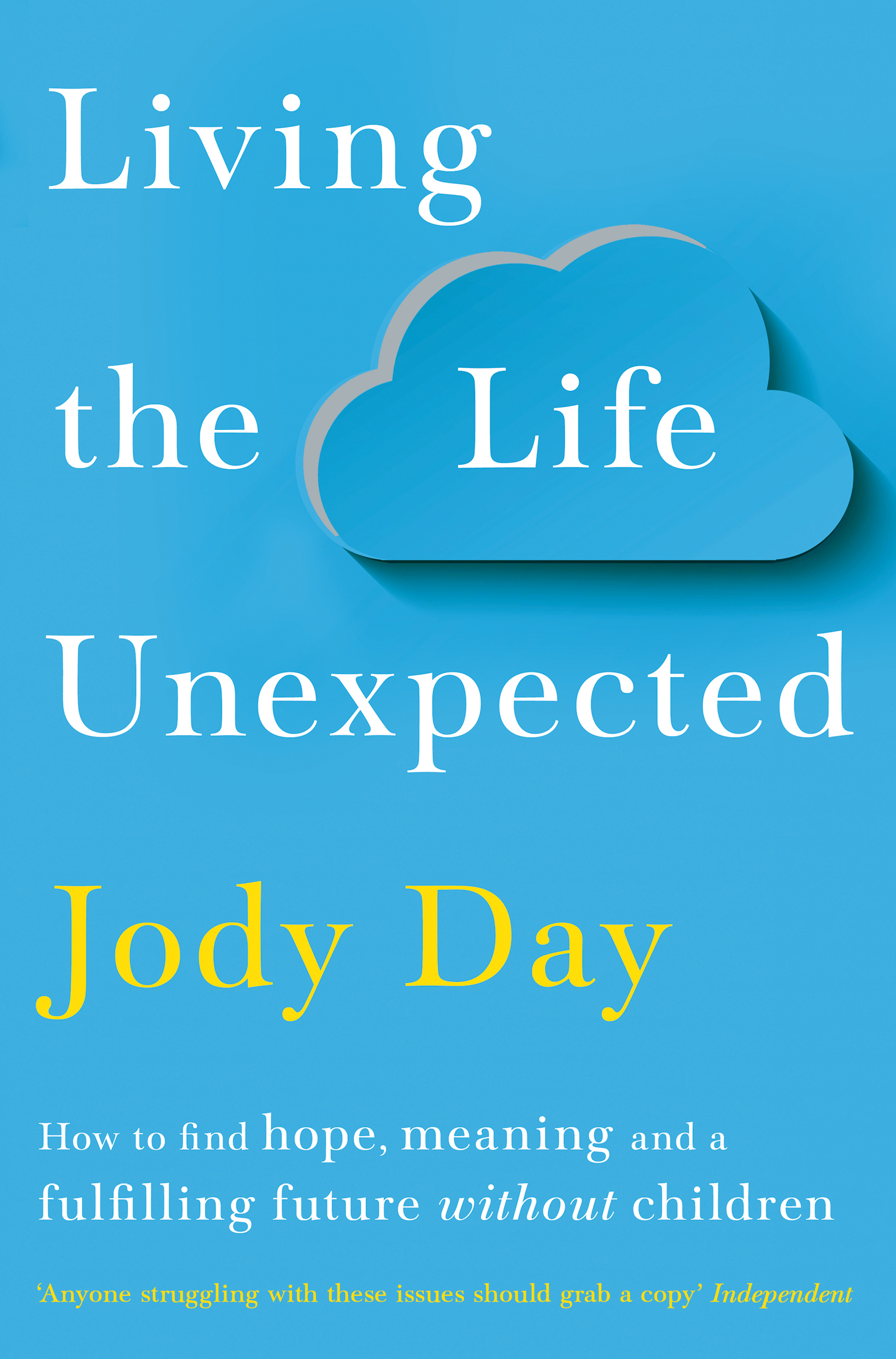 Jody Day is a pioneer and eloquent spokesperson for childless women worldwide. I’ve admired her work from afar for years (she’s in the UK, I’m in the US) and was star-struck when I met her in person at the 2017 NotMom Summit. She’s warm, perceptive, smart, and unfailingly candid.

In 2011 Jody founded Gateway Women, an online network for childless women which has blossomed into a huge, worldwide community of support. In 2013 she self-published Rocking the LifeUnexpected: 12 Weeks to Your Plan B for a Meaningful and Fulfilling LifeWithout Children. Thanks to its success, her book was picked up by Bluebird(PanMacmillan) and published with a new title, Living the Life Unexpected in 2017. A fully revised and expanded second edition of what’s now called Living the Life Unexpected: How to Find Hope, Meaning, and a Fulfilling Future Without Children comes out March 19, 2020.

The new edition is chock full of topics we can delve into, resources to consult, and learnings from childless people across the globe.Like a well-connected, soulful friend, Jody opens our hearts to effectively grieve that which we will never have and open ourselves up to create vital, meaningful lives. This book is practical, kind, honest, and supportive.

One of the biggest challenges when traveling the childless not by choice path is we often think we travel alone. We clam up, because we think our emotions are running too hot or we’re simply tired of feeling different.So many people want to know why we don’t have kids, even when they don’t ask.It’s really nobody’s business. The hard part, though, is when we shut down the entire topic.

Instead of talking about why we don’t have kids, we can explore the impacts of not having them. Take friendship, for example. We all have experiences that are both challenging and fulfilling and can ask someone we trust, “How have you weathered friends having kids and others not? What’s worked; what’s been challenging?” When we swap stories, solutions, and sorrows, we get to see things from new perspectives. Sometimes people agree with us, others have entirely different experiences than we do and suggest new ways we might approach loved ones who are fading away. The space between us is full of pitfalls and doors left ajar for us to walk through if we can find the courage to try and the words to say.

Especially when we’re in the throes of deeply hurtful, tender times, it’s unreasonable to think we can or should talk about our situations, our dashed hopes and dreams, or even celebrate the joys of our friends who have kids. That’s when we can seek out stories of other childless women and men, especially those older than we are. When I was collecting stories for my book Do You Have Kids? Life When theAnswer is No, I relished hearing from those older than me, particularly women in their 70s, 80s, and 90s. Long gone is the searing tenderness of wanting and not having them. Long gone, too, is defensiveness for following paths that didn’t center around progeny. Now they are simply women sharing the truths of their lives, the strategies they used to navigate different challenges, and the often surprising opportunities they’ve celebrated. Oh my, they’re fascinating! But that’s not the best part. The best part is seeing how very powerful it is for them to finally feel heard and valued.

Most women I interviewed told me they’d never been asked about what their lives have been like. Once they realized I really wanted to hear what they had to say, they opened up. Stories flowed, remembrances of former ways of being contrasted with how they are today. I will never forget these times of sharing, and I suspect they won’t either.

What we come away with when we ask to hear another’s story is the power of bearing witness, validating a way of life we ourselves may be living today or sometime in the future. Let’s face it, our mothers can’t tell us what life is like not having kids.

We’re part of a web we often don’t even know exists. When I stopped fertility treatments and moved to a rural community where everyone had kids, I see now that the isolation I faced primed my courage to reach out. I flubbed in my early efforts, and I still do. But I now know that doesn’t really matter. What does matter is that I share my stories and perspectives when I can, listen when others offer theirs, and spit out the questions I’m struggling to understand.

What are you wondering about? What’s got you flummoxed? After my decades-long marriage ended a few years ago, I was troubled about who would be my emergency contacts and how to ask them. I asked a few single, childless womenI admired about their own plans and heard wonderful stories and suggestions.Better yet, they shared the criteria they considered in selecting people, as well as how they asked. All I had to do was repeat their words. When it was my time to ask, I stuttered and hemmed and hawed to the point that my people figured out what I wanted before I could spit out the request myself. Everyone said yes. I was incredulous they’d take on such roles for me, even though I’d agreed without a second thought to do the same for them. My non-mom mentors showed me the way.

The open, healing effort Jody Day started back in 2011 can’t be stopped. We now have generations of women and men coming out of the shadows willing to be frank about their realities. By partnering and sharing our truths, we combat those sticky stigmas and stereotypes about not having kids and compose vital lives fully realized.

Have a gentle, private read of Living the Life Unexpected or share a random page with someone whose story you’d like to hear. Jody has generously offered a free book to the first of my readers to send a request using the contact form available on my website www.katekaufmann.com/blog

I’m also honored to participate in Gateway Women’s March 14 webinar“Coping with Mother’s Day”. The video will be posted shortly thereafter at https://gateway-women.com/

5 Ways People Can Overidentify as Parents
The Childless Are Worthy to be Seen and Heard
Elder Orphans: Who Will Hold Our Hands When We Die?
How China's Three-Kid Policy Impacts Those Who Have None
Living Outside the Fortress of Family
How I Wrote a Book About a Touchy Subject
The Unique Love of a Non Parent
Regrets? Resentment?