Talking in the New Year 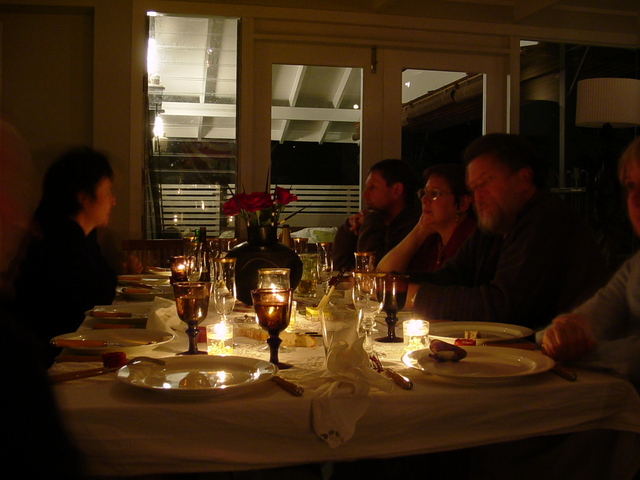 Of late, I've been on the fringes of the dinner party circuit, but New Year's Eve was a rip-snorter. Just a small affair, really, with a few couples heading off to the next soireé before midnight. I don't know if it was the bow ties and glitter in the room or the fact that even the hosts didn't know everyone there, but we all seemed in top form.

Top form for me means layers of alternately playful and serious conversation. New discoveries about those we think we know and quick connections with moments-ago-strangers that delight and illuminate. Maybe the invective that no one sit adjacent to or across from the person they came with set the conversational stage so elegantly.

Did you know there's strict protocol for table talk among royalty? I've always marveled that, at least on film, no one ever seems to be left out. Well, it was explained to me that at each course one shifts the direction of one's intended conversational partner from right to left to across the table. Everyone know that's so, and the evening progresses with social ease, clear expectations, and conversational variety.

Of course, we commoners could keep up with such protocol for only so long, and we soon devolved into mish-mashed conversational pods. I believe the hostess asked me what I was up to these days. "I've just finished writing a book," I said, "and it's being shopped around for publishing." The hip gentleman animator across the table asked what it's about. Oh boy, I thought, let's see where this goes.

"It's about women who haven't had children," I said. "I'm one of those. How about you?" Of the five of us, turned out myself and the animator aren't parents, one of us by choice and the other by circumstance. The hostess and her husband have two sons; her sister a son and daughter.

Anytime those without children exceed our statistically-expected twenty percent, I've learned that increases the chances we can actually talk about the subject. So I tossed out having tried unsuccessfully for kids, how that was tender when I was going through it, but now it's an important fact in the more broad narrative of my life. Not a source for pity or scorn, just reality.

One of the mothers disclosed she never thought she'd want kids, and now she's deservedly crazy about the two she raised largely on her own while working full-time. The other mother confessed to frequently feeling looked down upon by career women for having been a stay-at-home mom.

I don't remember exactly what was said, but a comment was made about raising kids being a noble endeavor or some such. It didn't strike me as incendiary, but the single mom bristled. My tablemates, instead of quickly shifting topics, stayed with it. We were rewarded with one of those rare exchanges of inquiry and apology, clarification and personal disclosure that I think are required before deeper understanding can be had.

Just like when we grapple with issues like ethnic and economic diversity, sexual harassment, and various forms of privilege, I believe these conversations are necessarily messy and uncomfortable. We're often in personally uncharted territory, hearing ourselves express opinions we didn't even know we had. Or making mistakes and retracting what we've just uttered. Or asking questions we've been raised to consider impolite.

My intent for 2018 is to walk more boldly into these places of vulnerability with a commitment to curiosity, humility, and forbearance. We can tolerate the discomfort of awkwardness and misunderstandings, as long as the focus remains on knowing and being known as we really are.

Posts
Resources Abound...A new edition from Jody Day!
An all new, expanded edition of pioneer Jody Day's best-selling resource for the childless, Living the Life Unexpected: How to Find Hope, Meaning, and a Fulfilling Future Without Children, coming out March 19, 2020. https://gateway-women.com/living-the-life-unexpected-2nd-edition-world-blogtour-1-19th-march-2020/
Written by
Kate Kaufmann
Posts
Regrets? Resentment?
Professor Shannon McMahon's article in the Chronicle of Higher Education talks frankly about how regret and resentment for the road not taken have played out in her life. Some may be surprised by what she has to say, and I bet most will be parents.
Written by
Kate Kaufmann
Posts
When Science Tries to Make Babies
"Women and their partners can learn more today from a fast food menu than they can from a clinic selling expensive and life-altering assisted reproduction procedures," Pamela Mahoney Tsigdinos today on the Boston media health site STAT
Written by
Kate Kaufmann
Be the first to know.
Sign up below to get updates about Do You Have Kids? publication schedule, Kate's workshops and speaking engagements, and other nuggets.
Thank you! Your submission has been received!
Oops! Something went wrong while submitting the form.
Kate Kaufmann
ContactBlogPressspeakingWorkshopsThe BookAboutHome